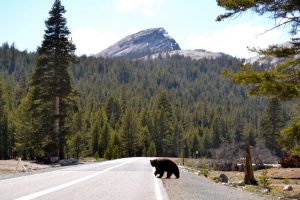 A Bear In Yosemite

Yosemite, CA — There was a big drop in the number of people coming to Yosemite last year as the park was closed for an extended period and there were restrictions during other times.

Park Ranger Jamie Richards says, “The park was closed from March until June, so we had an extended closure, the longest closure that Yosemite National Park has had on record.”

When the park reopened in June there was a reservation system put in place to cap attendance during the peak months.

She adds, “We also had some wildfire impacts and closures related to other natural disasters.”

Yosemite reported annual attendance over 4-milion each year from 2014 to 2019, including the record breaking year of 2016 when over 5.2-million people came through the park gates.

The National Park Service has attendance numbers readily available for Yosemite dating back to 1985, and 2020 was the lowest it has been during that 35 year period.