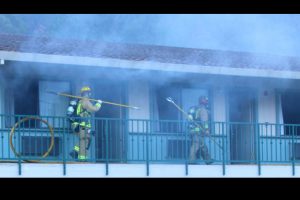 Mariposa County, CA – Fire investigators are still trying to determine what ignited a blaze in a two-story building at the Yosemite Cedar Lodge.

The lodge is located off Highway 140 in El Portal. Mariposa Community Fire Department was alerted to the fire by the manager of the Lodge around 2:30 p.m. Saturday. When firefighters arrived, they saw heavy smoke billowing out of the backside of one of the two-story buildings. Steven Ward, division chief for the department and CAL Fire, reports that luckily, most of the rooms were being used as storage.

The fire was knocked down in about 2 ½ hours and crews remained on the scene for a total of seven-hour doing salvage while investigators worked to determine a cause.

“No suspicious activity or devices or anything of that nature that were noted or found,” disclosed Ward. “It’s under investigation at this point.”

Fortunately, the lodge was unoccupied. All the employees were able to evacuate the lodge on their own and no injuries were reported. Ward estimates the damage to the building at about $400,000. Additional resources on scene included Yosemite Fire, Yosemite Ambulance, Yosemite Rangers, and CalFire.