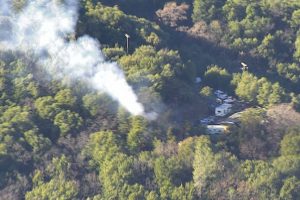 Vehicle fire into vegetation near Yankee Hill in Tuolumne County

Update at 10:55 a.m.:  Cal Fire reports a blaze that was first reported as a structure fire turned out to be a vehicle fire that spread to nearby vegetation and has been handled by fire crews. CAL Fire reports their crews along with Sonora City Fire were able to quickly stop the flames’ forward rate of spread at to an 1/8 of an acre. A small crew will remain on scene, which is in the 22300 block of Gunsight Road near Covington Mine Road, east of Highway 49 in the Yankee Hill area of Tuolumne County, mopping up for the next couple of hours.

Original post at 9:34 a.m.: Yankee Hill, CA — Fire crews are heading to a report of a house fire in the Yankee Hill area of Tuolumne County.

Several calls came into CAL Fire dispatch reporting a large plume of smoke coming from the 22300 block of Gunsight Road near Covington Mine Road, east of Highway 49. There are no details on whether there has been any spread to vegetation in the area or whether any other structures have been threatened. An update will be provided as soon as new details come into the newsroom.