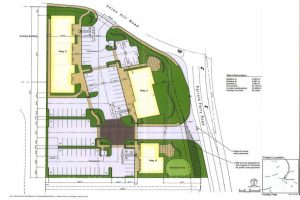 Columbia, CA — There was a contentious debate over water services for the planned Stone Mill Center near Columbia.

The TUD Board of Directors discussed whether to approve the CEQA Notice of Determination environmental documents and the construction and transfer of a water and sewer main line to be built by the developer.

Plans for the project, at the intersection of Highway 49 and Parrotts Ferry Road, were approved by the Tuolumne County Board of Supervisors in 2017. A lawsuit was filed, and the developers were later victorious.

The three commercial properties planned would use an estimated 1,084 gallons of water per day, according to TUD staff. This is the equivalent of four single-family homes. District staff determined in a report submitted that it would not have a notable impact on supply.

Only three board members took part in the Stone Mill Center discussion. Director Jeff Kerns recused himself because his title company has conducted business with the developer in the past. Board Chair Barbara Balen also recused herself because she has spoken publicly in other forums against the project, and could have a predetermined bias.

The issue was debated for quite a while, and to summarize, board member Ron Ringen cited current water supply concerns that were brought up earlier in the meeting. Board member Lisa Murphy moved that the project be further reviewed by an in-house TUD committee. Ringen also supported the concept. Gary Simning, speaking on behalf of Stone Mill Center, argued that the board members were “playing games” and that the project has gone through every legal step required, and they had been working closely with TUD staff. The remaining board member, David Boatright, moved to support the project as proposed.

In the end, there was no consensus, or action taken, on providing water service for the project.

Video from the meeting can be found here.