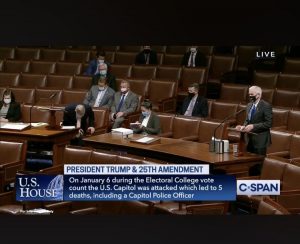 Update at 11:35am: After voicing opposition last night to the use of the 25th Amendment against President Donald Trump, Mother Lode Congressman Tom McClintock spoke once again on the House floor this morning. The latest speech was in opposition to impeaching the President.

Original story posted at 7:26am: Washington, DC — Congressman Tom McClintock, a Republican who represents the Mother Lode, spoke on the US House floor last night against passing a resolution for Vice President Mike Pence to invoke the 25th amendment and remove President Donald Trump from office.

McClintock opened by stating, “What a sad and ominous way to begin the 117th Congress. Hasn’t this body done enough in the last session to divide our country and abuse our Constitution without carrying that damage into the new session?”

The House action was mostly ceremonial, as ahead of the vote, Vice President Pence dismissed the idea of invoking the 25th amendment. Democrats are now pushing forward articles of impeachment. House Speaker Nancy Pelosi says President Trump incited a “deadly insurrection” last week at the US Capitol which she notes resulted in five deaths and serious injuries to 50 law enforcement officers.

“What a sad and ominous way to begin the 117th Congress!  Hasn’t this body done enough in the last session to divide our country and abuse our Constitution without carrying that damage into the new session?

The 25th Amendment specifically addresses the incapacity of the President to discharge the duties of his office.  It was never intended as a political weapon when Congress doesn’t like the way he discharges those duties.

I read his speech.  He never suggested rampaging the Capitol and disrupting the Congress.  He urged them to “peacefully and patriotically make your voices heard.”

Many of us Republicans joined a bipartisan vote to respect the votes of the Electoral College, despite our suspicions, misgivings and fervent desires.

We did this because the Constitution commanded it and our institutions depended on it.

Today, those same principles should compel a bipartisan vote to oppose this grotesque abuse of the 25th Amendment.

Last week, the majority argued the President tried to abuse the Constitution to overturn the votes of the Electoral College.  He asserted no direct power; rather, he urged the Vice-President and Congress to do so.  Many of us declined his bad advice.

Yet this week, the majority is directly asserting power to misuse the 25th Amendment in a manner that overturns the votes of the previous Electoral College.  Don’t they see that they are committing directly the very same offense they accuse the President of committing indirectly?

Every act we take builds a precedent for future acts.  Once Congress asserts a new role as armchair psychiatrists and a new power to equate intemperate speech with functional disability, the most important pillars in our government – stability, the rule of law, and the separation of powers – will fracture.  It won’t affect this President, but it will stalk future Presidents from this day forward.

For their sake, please don’t do this.”