Calaveras Will Start Offering COVID Vaccine For Those Over 75 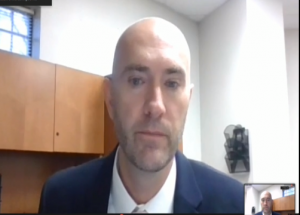 San Andreas, CA — Beginning this coming Monday, Calaveras County is planning to start offering the COVID-19 vaccine for any residents 75 years of age or older.

The announcement was made at the board of supervisors meeting this morning during a presentation from Interim Health and Human Services Director Samuel Leach and Mark Twain Medical Center President and CEO Doug Archer.

Leach noted to this point, 580 vaccines have been distributed in the county. The initial groups have included healthcare workers on the frontlines, firefighters, EMTs, and assisted living centers.

Starting on Monday, CEO Archer noted that vaccine clinics will be set up at Mark Twain Medical Center in San Andreas for those in Tier 1B, which includes anyone who is 75 years or older. More specific details will be announced later this week about how to schedule an appointment and the location to go. The plan is to administer 100 vaccines on day one, and then ramp up to around 200-250 daily. They will be free of charge. The clinics will run four days a week, depending on the vaccine availability. There will be screening to ensure that those receiving the vaccine are Calaveras residents.  Those receiving it will have a follow-up appointment scheduled for the second dose in about four weeks.

Leach said the upcoming phase is a “heavy lift,” and praised Mark Twain Medical Center’s role in being a community health partner. He also added that he is in discussions with Calaveras Superintendent of Schools Scott Nanik to start offering the vaccine to teachers and personnel employed with the various school districts next week.

While the news about the vaccine distribution was positive, Leach acknowledged that emergency responders have been stressed in recent weeks due to a spike in local cases.

Asked about the increase, and the related challenges of contact tracing, Leach responded, “This is a real thing, and a real surge. I need people to take this seriously.”

He added, “You really need to proceed right now during the depths of the surge as if everyone you come into contact with has Covid. This isn’t March or April when we were still asking people if you know anyone who has had it. Pretty much everyone who is listening to this knows somebody who has had it, or has it right now. And if you are in my position, you know lots of people who actively have Covid right now.”

He stressed the importance of mask-wearing, avoiding gatherings and handwashing. He hopes the community will be in a better place come springtime.

In other business today, the supervisors unanimously elected Ben Stopper to serve as chair for 2021 and new supervisor Amanda Folendorf will be the vice-chair. Stopper served as vice chair last year.