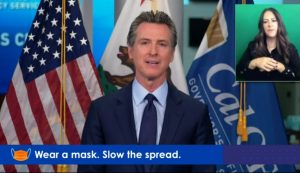 Asked again yesterday during his afternoon COVID-19 press conference, appearing irked, Newsom stated, “I’m all for it, so you got it.”

Quickly changing the topic, he added, “But I’m trying to get 290 folks from the Department of Defense, and trying to get more support from all levels. To be candid with you, I’m focused on this vaccine distribution.”

Yesterday afternoon the State Assembly passed a resolution urging Congress to impeach the President, citing insurrection at the US Capitol. It was introduced by former Republican leader Chad Mayes, who left the party, and is now an Independent. Mayes was removed as Republican leader in 2016 after supporting Governor Jerry Brown’s extension of cap and trade rules.

The resolution yesterday had no support among Assembly Republicans, but still easily passed 50-6 due to the overwhelming support of Democrats.

Newsom, meanwhile, has also been under political pressure for his handling of the coronavirus pandemic. Proponents of a coordinated recall effort last week announced that they have collected over 1-million signatures, over half what is needed, to place the issue on the ballot later in the year.