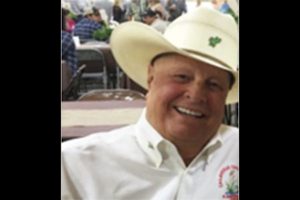 Trinchero died on Tuesday. He was 80 years old and had been in declining health for several years, according to CEO Fair Manager Laurie Giannini. Trinchero held the position of Fair Director for 22 years. Over those years, he was instrumental in forming the “Friends of the Calaveras County Fair & Jumping Frog Jubilee” in 2008. It is a not-for-profit organization that works hand in hand with the Board of Directors. In 2011, he led the board in a reorganization that resulted in a financial and community revitalization, recounted Gianinni.

Regarding what he brought to the fair smiling Gianinni shared, “Professionalism, integrity, community. He was just very politically astute, and he definitely brought laughter.”

Trinchero began his tenure with the Fair in 1999. He was appointed by Governor Gray Davis and continued to serve under Governors Arnold Schwarzenegger, Jerry Brown, and Gavin Newsom. Throughout his time with the fair wore several different hats including President of the Fair Board, Vice President, Chairman of Finance, Chairman of Operations, Board Liaison to the Frog Jump Committee, Theme Committee, Junior Livestock Committee, and Destination Angels Camp.

Gianinni will remember him this way, “He was just ever-present. For me personally, he was a mentor, a father figure, a friend, and very special to me and mine.”

Noting that Trinchero was passionate about the Outstanding Livestock Exhibitor Program since helping create it, Gianinni said every year he and a panel, usually consisting of Director Gay Callan as well, would judge the candidates. She remarked that this was not an easy task as they would have to review essays, record books, projects and conduct an interview with the candidates. Gianinni commented that Trinchero loved interacting with the exhibitors, offering positive feedback, and giving the exhibitors goals to work toward. In 2020 he interviewed the candidates via zoom. “It was the first time I sat in on the interviews and was amazed how Bob knew the students, had read and studied their resumes, essays, and record books. He was completely engaged. Bob was like that, forever present in the moment.” relayed Giannini. She added that a memorial service is expected to be held late this summer.

It is with a heavy heart that I address the loss of our board partner, friend, mentor, and leader Bob Trinchero. His long tenure of 22 years on the 39th DAA board was one of total dedication, several years as board president and always a positive force with all projects that came our way. His vision and participation in multiple projects were always with positive determination and without his direction, most would not have been completed. Our board flourished because of his leadership, experience, and knowledge. On behalf of the Calaveras County Fair board, we extend our thoughts and prayers to his wife, Pat, son, Jason, and extended family. He will be dearly missed, not only as a director and past president on the fair board, but as a confidant, dear friend, and mentor.