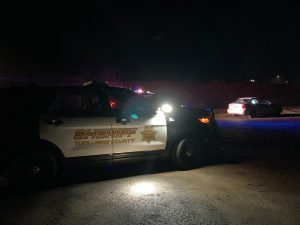 Sonora, CA – A traffic stop on Tuolumne Road last night for an inoperable taillight resulted in a drug, money and weapon bust.

Behind the wheel was 54-year-old Mark Vanderburg and passenger 32-year-old Jenna Christopher both of Modesto. A records check run by the Tuolumne County Sheriff’s Deputy revealed he was on parole, allowing for a search. It turned up a flashlight stun gun, 50 grams of methamphetamine, over $500 in cash, and other paraphernalia that was seized.

Vanderburg was arrested for felony transportation and possession of methamphetamine for sale and paraphernalia, along with misdemeanor charges of a prohibited person having a stun gun and violation of parole.

Christopher was arrested for felony transportation and possession of methamphetamine for sale and drug paraphernalia, a misdemeanor. Both were placed on a $40,000 bail for the charge of manufacturing/etc. of a controlled substance.