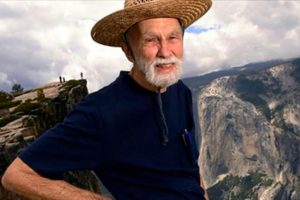 Sonora, CA – Legendary climber George Whitmore one of the original three that scaled El Capitan in Yosemite National Park and a conservationist who devoted his life to protecting the Sierra Nevada, has died.

Whitmore died on New Year’s Day from complications caused by COVID-19. He had tested positive for COVID-19 on Dec. 13th, after developing an occasional cough and subsequent fever. Whitmore was hospitalized for the virus and then moved to a Fresno rehabilitation facility. He sadly died a week later from damage to his lungs.

Whitmore was the last surviving member of the trio that was first to reach the top of El Capitan on Nov. 12, 1958. In 2008, Whitmore gathered with climbers from around the world at Yosemite to celebrate the 50th anniversary of his 3,000-foot ascent of the sheer granite rock with Wayne Merry and Warren Harding, who died in 2019 and 2002, respectively.

A pharmacist by trade, Whitmore retired in the 1970s. He was active in the Sierra Club. His conservation efforts included helping to establish the Kaiser Wilderness in 1976 and the California Wilderness Act of 1984, which added 1.8 million acres into the National Wilderness Preservation System. He was active in the blocking of a proposed ski resort at Mineral King in the 1960s and ’70s by the Walt Disney Company. The valley subsequently became part of Sequoia National Park. Whitmore actively attended Sierra Club meetings until the pandemic started and the meetings went online.