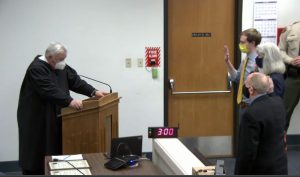 Sonora, CA — Three new Tuolumne County Supervisors were administered the oath of office from Presiding Judge Kevin Siebert, and he followed by offering some words of wisdom.

A special meeting was held during the noon hour to formally welcome Jaron Brandon, David Goldemberg and Kathleen Haff to their new positions

Returning supervisor Ryan Campbell opened the meeting by stating, “I want to extend a very heartfelt thanks to past supervisors (Sherri) Brennan, (John) Gray and (Karl) Rodefer for their combined 28 years of service to this county. I also want to welcome and greet the three new supervisors who have stepped up to represent Tuolumne County with courage, dignity and honesty.”

After administering the oath, Judge Siebert wished the new board well, and stated, “Where much power is given, much is expected of those who exercise that power. And I think you will feel that…once you start making some heavy decisions. It always seems easier to make the right calls, when you are not the ones making the calls.”

He used the analogy of a referee on the field as opposed to those watching a game from home.

Judge Siebert also quoted advice passed down to former Supreme Court Justice Antonin Scalia from his father. “Brains are like muscles. You can hire them by the hour. The only thing that’s not for sale, is character.”

He encouraged the new members to keep the advice in mind as they make decisions for the county.

Immediately after the oath, the new board unanimously elected Campbell to serve as chairman in 2021 and supervisor Anaiah Kirk as vice-chair. The first regular meeting for the new board is coming up tomorrow.