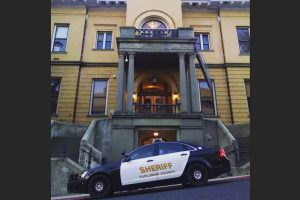 Sonora, CA – A Probation search of a residence in Sonora last Tuesday discovered a stolen rifle. The rifle’s registration information lead to its safe return.

Deputies assisted Tuolumne County Probation’s High-Risk Supervision Team conducted a search of a Sonora residence. They located a rifle inside the bedroom closet occupied by 28-year-old Irene Hammock of Sonora. A record check of the rifle’s serial number showed the rifle had been reported stolen out of San Joaquin County. Hammock admitted to possessing the stolen firearm.

Deputies contacted the owner of the rifle to inform him they had located it. The Tuolumne County Sheriff’s office says, “The victim was beyond happy” and told deputies the rifle had sentimental value as it was a birthday gift from his father back in the 1950’s.