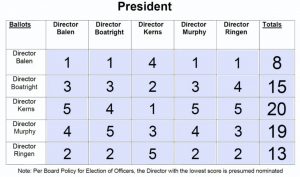 Sonora, CA — The Tuolumne Utilities District has elected a new board president for the coming year.

Yesterday was the first meeting for incoming members Lisa Murphy and David Boatright who won the seats previously held by Bob Rucker and Ron Kopf.

The five board members were asked to rank their preferences for president and vice president, and a returning member, Barbara Balen, was the leading vote-getter.

Director Murphy then made a motion to elect Balen as president, and it was seconded by Director Ron Ringen.

Immediately after, Ringen was elected vice president for the new year.

Rucker had served as president during the past two years. Director Jeff Kerns served as vice president last year.

TUD is the largest water and wastewater utility service provider in Tuolumne County and serves around 44,000 residents.