Cause Released For 2018 Donnell Fire In Stanislaus National Forest 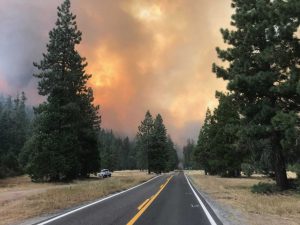 Tuolumne County, CA — Two years after it ignited, the US Forest Service is now releasing the cause of a wildfire that burned 36,000 acres and destroyed 53 cabins and other structures.

The Donnell Fire, which was spotted on August 1, 2018 near the Donnell Vista point, also destroyed the popular Dardanelle Resort and the historic 1933 Dardanelle Bridge.

Forest Service spokesperson Diana Fredlund says the cause was determined to be an “escaped unattended campfire.”

She adds, “Since the fire ignited, the Forest Service has worked diligently to investigate the cause of the fire by analyzing the area of the fire’s origin, evaluating physical and documentary evidence, and conducting many witness interviews.”

Asked about suspects or citations, she says, “We don’t have any other information regarding individuals, but the Department of Justice and the Forest Service Office of General Counsel did review the information and determined the cause.”