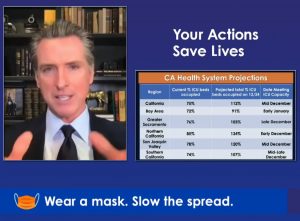 Sacramento, CA — Governor Gavin Newsom hints that he is strongly considering a “stay at home” order similar to March based on the current trajectory of COVID-19 cases in the state.

He stated, “This is in the absence of making better decisions,” and argued that there is still time to turn things around.

51 of California’s 58 counties are now in the most restrictive purple tier category. Newsom declined to offer specifics during his noon press conference about what the stay at home order could include, but said the actions would be in response to a surge in hospital cases, and transmission at its highest rate to date.

Newsom noted that 75-percent of the ICU beds in the state are currently occupied, and the public health department projects the number will reach 112-percent by December 24, unless a shift occurs. California set a record with 7,400 COVID-19 hospitalizations on Sunday.

There are nearly a dozen large “pop-up” treatment facilities ready to operate in the state to help meet a surge. Locally in the Mother Lode, patients would likely be sent to the Sleep Train Arena in Sacramento, if needed.

The Governor also today called on Congress to act quickly to pass a federal COVID-19 recovery package. In addition, he announced new actions like additional sales tax deferrals, including an automatic three-month extension for taxpayers with less than $1 million in sales tax. He also plans to expand interest-free payment agreements for larger companies. The state is also creating a “California Rebuilding Fund” with $125-milion in relief for public-private investment in small businesses and a $100-million Main Street Hiring Tax Credit program.

More announcements are expected over the coming days. The stay at home order could be issued ahead of a vaccine being distributed to some of the first people in the state, those at high risk and on the frontlines, late next month.