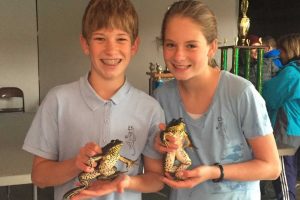 Angels Camp, CA– The Netflix Reality TV Show “We Are The Champions” is very popular this week on Netflix.

According to Collider’s Top 10 weekly list released on Friday, November 20, We Are the Champions was 8th out of 10 shows. Calaveras County Fair & Jumping Frog Jubilee shared a screen capture of Collider ranking the docuseries in first place above such shows as The Office, American Horror Story, The Queen’s Gambit and The Crown.

The show description says it explores an array of unique competitions, from the quirky to the bizarre, and meet their passionate communities. The last episode of the first season of 6 shows features “Frog jockeys and their crew of croakers set out to make big leaps and break world records in a sport where three hops stand between them and victory.”

Calaveras County Fair & Jumping Frog Jubilee further supports the ranking stating “We are quirky, fun and passionate about frogs and now we are a Netflix Sensation.”