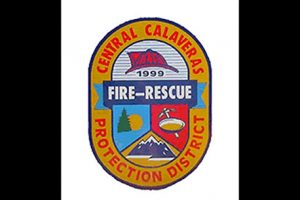 Update at 1:19 p.m.: After several calls from residents reporting to Clarke Broadcasting that the heard and felt an explosion, some as far away as two-mile on Swiss Ranch Road, we decided to contact the lead agency on the fire Central Calaveras Fire-Rescue Protection District for more details on what was originally reported as a structure fire into vegetation by CAL Fire.

District spokesperson Joanna Tedder relayed that when the call came in just after 10 p.m. last night it was reported as a possible propane explosion in the 4300 block of Railroad Flat Road in Mountain Ranch, between Old Emigrant Trail East and Jesus Maria Road. She shares that the blast was also felt at the Jesus Marie fire station and details, “When our engines arrived on the scene, they described an outbuilding that had exploded with possible extension into wildland. Upon further examination, it was determined that there was no extension, it was just burning pieces of the building. They also determined that none of the residents were injured.”

Regarding the structure, Tedder discloses that it was a cargo container and the explosion did not involve a propane tank. Crews cleared the scene around 2 a.m. She adds that the investigation into a cause has been turned over to the Calaveras County Sheriff’s Office. We contacted spokesperson Sgt. Greg Stark, who replied, “We are investigating an explosion incident.  Nothing further to add at this time.”

Original post at 6:27 a.m.: Mountain Ranch, CA — Firefighters were able to quickly put out a structure fire in Calaveras County last night, but not before the flames spread to nearby vegetation.

The blaze ignited just after 10 p.m. on Monday in the 4300 block of Railroad Flat Road in Mountain Ranch, between Old Emigrant Trail East and Jesus Maria Road. When firefighters arrived on the scene flames were shooting out of an outbuilding. The fire also ignited some grass nearby, which crews were able to the small spot.

The outbuilding was heavily damaged. What sparked the blaze is under investigation.