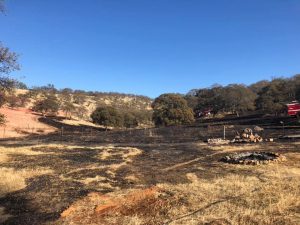 Update at 4:00pm:  CAL Fire reports, fortunately, the fire did not cause any injuries and firefighters updates the burned area to 5.7 acres. The cause was an escaped debris pile and the person responsible was issued a citation for not having a burn permit. Calfire officials express it is important to obtain a permit before you light your pile. Permits are handled online due to COVID-19 precautions as detailed on our burn day page here.

Update at 12:57pm: CAL Fire reports that quick progress is being made extinguishing a three-acre vegetation fire in the Don Pedro area. The air tankers have now been released back to Columbia. Officials are continuing to mop-up the blaze.

Original story posted at 12:55pm: Don Pedro, CA — Officials are on the scene of a grass fire in the Don Pedro area.

It is situated in the 4500 block of Los Nogales Drive. It was initially reported to officials as a possible escaped debris burn. Air and ground resources were dispatched, so be prepared for activity in the area.