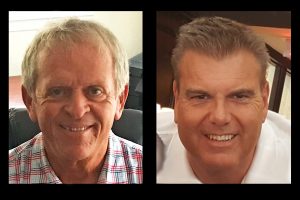 Sonora, CA — A local community leader, Clarke Broadcasting General Manager Larry England, will be retiring, and his successor has been announced by the company.

England began his journey with Clarke Broadcasting nearly 52 years ago as an announcer with WNGC in Athens, Georgia, and ascended to the General Manager role there. Of note, he was always a big proponent of University of Georgia athletics, and being a tremendous broadcaster, was the stadium announcer for football fans that packed into Sanford Stadium on Saturdays.

In 2001, England was encouraged by Clarke Broadcasting President and Owner H. Randolph Holder to make the Mother Lode his new home and help take the local stations to new levels in the community.

England has also been involved with numerous organizations and community efforts.

England says, “It has been my distinct pleasure to be a part of the Mother Lode Community for the past 20 years. I am most proud of the continuing legacy the people at Clarke Broadcasting exhibit throughout the community. Tuolumne County is a very special place.”

Holder notes, “Larry has been and will always be a valued member of the Clarke and Holder Family.”

After a nationwide search, Holder announces that Tom Nankival, an Iowa native, has accepted the General Manager position.

Holder adds, “We are excited to have someone of Tom’s caliber and experience, and background, coming from a radio family.”

Nankival has had a lifelong career in radio that was fostered by his own parents’ serving as local radio hosts.  He started in radio on-air while in college, later moving into sales and management roles. He has served on many community and non-profit boards, including the Iowa Broadcasters Association Board of Directors.

Nankival says, “I could not be more thrilled to be joining the Clarke Broadcasting family and leading three tremendous stations as well as mymotherlode.com.”

Adding, “As radio celebrates its 100th anniversary this year the medium remains vibrant, and nowhere is it as vibrant as in the Motherlode. Our stations and website have become vital resources for the communities we serve, and I’m proud to carry on the legacy that Larry England and H. Randolph Holder have established. My wife Gina and I expect to be fully relocated by the first of the year, and hope 2021 is a year that puts the turmoil of 2020 in the distant past.”

Nankival concludes, “I look forward to being part of the Mother Lode community and hope I get to meet all of our advertisers and listeners as soon as it’s practical.”