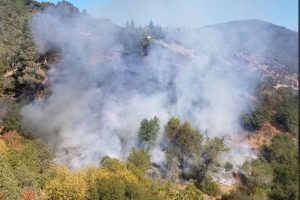 So, we decided to check in with CAL Fire Tuolumne-Calaveras Unit spokesperson Emily Kilgore regarding the uptick. She says calls are definitely up and attributes it to the first fall storm, stating, “The problem with getting short storms like that is that the precipitation comes, and it confuses people. Because it’s such a short storm, it doesn’t soak the soil.. (we need) those torrential downpours that really soak the soil.”

While it may seem that the fire season just continues to linger and is running longer than normal, Kilgore responds, “Not necessarily, it’s going to be weather dependent as well as what resources and fire activity are occurring throughout the state.  So, it [fire season] has ended as late as January and it has also been as early as October. So, we’re kind of in that window when patterns change. It’s just a matter of having acceptable conditions to lift the burn suspension.”

Kilgore recommends that residents still work on reducing property fuels and use alternatives to burning such as mulching debris or taking it to a green waste drop off facility. She updates that CAL Fire is doing its part to reduce fuels as the Mt. Havalia Vegetation Management Project is underway in Tuolumne County near the community of Tuolumne. Ten acres of brush were burned on Wednesday and about another 3.8 were ignited today. This is a large project and Kilgore shares that additional acres could be burned in the future when conditions allow.