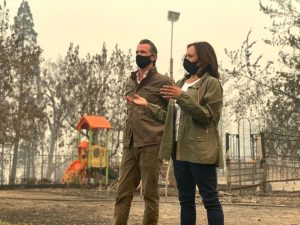 Sacramento, CA — Governor Gavin Newsom acknowledges that he has had many people, and political organizations, reach out to him with opinions about how to fill the US Senate seat of Vice President-elect Kamala Harris.

No timetable was given for a selection.

Newsom indicated that finding a replacement is not the most pressing issue currently on his priority list, stating he is more focused on the coronavirus response and recovery from the recent wildfires.

The Associated Press reports that top contenders for Harris’ seat are Secretary of State Alex Padilla and Congresswoman Karen Bass. Padilla is a longtime Newsom ally and would become the state’s first Latino US Senator. Bass was on the shortlist for President-elect Joe Biden’s running mate and is the head of the Congressional Black Caucus.

Becerra was tabbed by Governor Jerry Brown to replace Harris in 2016 as Attorney General when she was elected US Senator.

Harris’ US Senate seat is next up for re-election in 2022. She is scheduled to be sworn in as Vice President on January 20. President Donald Trump has not conceded the election and his legally challenging the vote count.