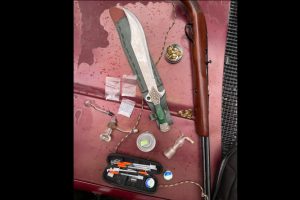 When questioned about the expired plates Castillo stated he had recently purchased the vehicle in Nevada but could only produce a handwritten bill of sale. Suspicious, the deputy decided to run a record check on Castillo that revealed he had arrest warrants for two misdemeanors and one felony warrant issued out of the county. It also showed that his driver’s license was suspended.

A searched of the pair and the vehicle uncovered two backpacks that contained methamphetamine, no amount was given, and drug paraphernalia that included syringes and needles. Sheriff’s spokesperson Sgt. Greg Stark details, “Deputies also located a loaded .22 caliber rifle with a cutoff stock and 37 rounds of live ammunition. It was found in the backseat of the car in a weapons case.”

Sgt. Stark added that the rifle was loaded and nearby was a tin marked “Castillo” on the floorboard of the vehicle. Castillo was arrested for a prohibited person in possession of a firearm, ammunition, and a controlled substance, both felonies, and misdemeanors including carrying a loaded firearm in a public place and having methamphetamine. He is being held on a $35,000 bail.

Harper was issued a citation for the syringes and needles found in her backpack and released at the scene.