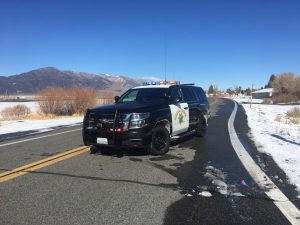 Bridgeport, CA — Two bodies were found by a Caltrans snowplow driver on Highway 395 near the intersection with Sonora Pass.

The Mono County Sheriff’s Office reports that an investigation determined that a man and woman had been murdered, but limited details are available. They were located on the side of Highway 395, about ten miles outside of Bridgeport.

The Mono County Sheriff’s Office reports, “The names of the deceased will not be released until next of kin have been notified. It can be confirmed that neither are local to Mono County or surrounding areas. The crime appears to be specific and targeted,”

The bodies were located Monday at around 6:30am. It is not immediately clear where the victims had resided. The CHP is also assisting with the investigation.