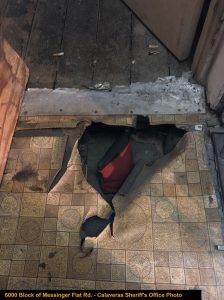 Paloma, CA – After just being released from jail last month, a Paloma man is back behind bars after a K9 unit uncovered a hidden compartment inside his home filled with drugs and weapons.

42-year-old Eric Sosa’s first arrest was in February of this year at his home in the 6000 block of Messinger Flat Road. The Calaveras County Sheriff’s Office Narcotics Enforcement Unit raided his house and subsequently charged with a prohibited person in possession of weapons, controlled substances, and stolen property.

In October, Sosa was released on his own recognizance, which allowed for searches of his person, vehicle, and residence. The unit made a probation check on November 6th and this time brought along K9 Nox. Sgt, Greg Stark the dog’s nose was able to sniff out about 2.5 ounces of methamphetamine, 2.7 grams of heroin packaged for sale, 4 methamphetamine pipes, evidence of drug sales, illegally obtained prescription opioid pills, opioid strips, butterfly knives, and a switchblade, a knotted “slungshot” weapon, ammunition, mortar style fireworks, a .22 long rifle and a .410 shotgun.

Sgt. Stark details where the items were found, “There was a floorboard the had the wood removed. The drug items were placed under the floorboards and concealed with additional woods and the weapons were found in various spots of the house.” Stark adds, “Some firearms were found in the rafters of the residence as well.”

One of those was a .22 caliber long rifle, which had been reported stolen out of San Joaquin County. Sosa was taken into custody without incident.