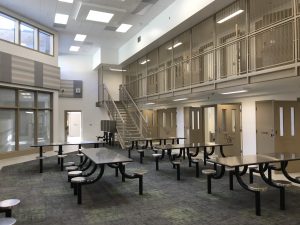 Sonora, CA — The ribbon was cut this morning signaling the completion of construction on the roughly $50-million J.H. Dambacher Detention Facility in Tuolumne County.

The 63,000 square ft. building is located at the Law and Justice Center campus off Old Wards Ferry Road, down the street from the $16-million Juvenile Hall, and $66-million Courthouse under construction. The latter two projects were fully funded by state grant money, and $33-millilon for the jail project also came from state grants.

At today’s ribbon-cutting, Sheriff Bill Pooley, along with the board of supervisors chair Sherri Brennan, and supervisor Karl Rodefer, gave a history of the project.

Highlighting some of the pluses of the new facility, Sheriff Pooley says, “The community will benefit from the programs (offered to inmates) and our ability to reduce the recidivism rate.” In addition, “instead of us releasing criminals every single day, hopefully, the community will get a sense of justice served, and we’ll be able to reduce crime.”

The new jail can eventually house up to 230 inmates, compared to 144 at the current facility. The plan is to carry out staff training over a 90 day period and then gradually bring over the initial inmates.

Click on the image box to view several photos from today’s ribbon-cutting and tour. Click on the video box to view the unveiling of the plaque at the front entrance by board chair Sherri Brennan.

Today’s event was invitation only and those in attendance were required to wear masks, were given a temperature check and kept in small cohorts.

The namesake of the facility is Sheriff Jack Dambacher, known as “The Black Hat,” who served 24 years in office, the longest ever for a Tuolumne County Sheriff.