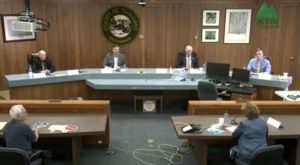 Sonora, CA — The four candidates for two seats on the Tuolumne County Board of Supervisors discussed a variety of issues on Thursday evening.

A debate was hosted by the Tuolumne County League of Women Voters from the Board of Supervisors meeting room in downtown Sonora. Because of COVID-19 precautions, no audience members were allowed in, and it was aired on Access Tuolumne.

All four of the candidates were on the podium together, in District One, David Goldemberg and write in candidate Cody Ritts, and in District Five, Karl Rodefer and Jaron Brandon. It was noted that incumbent District One Supervisor Sherri Brennan was also invited, but she declined to attend because she has suspended her campaign.

The questions ranged from budgeting priorities, to fire season, to development, homelessness and COVID-19.

There was much that the candidates agreed on, such as public safety and fire being the top priorities, and support for fire breaks, collaboration on homelessness and the need to always search out grant funding.

There was some disagreement over issues surrounding the economy and development. In the District One race, Goldemberg was critical of the county’s handling of the Tuolumne County Economic Development Authority, up to its dissolution, which he supported. When it comes to new development projects, he urged exercising caution, and considering things like water availability and increased traffic on “crumbling roads.” He stressed the importance of broadband internet to bring desirable jobs to the community.

On the counterpoint, Ritts argued that new housing and business development will help bring additional revenue to the county to help fund programs. He also argued for further streamlining the development process and having the county government make sure that infrastructure is in place for new development. His support of biomass efforts also came up multiple times, including as a way to help the economy.

In District Five, incumbent Rodefer touted the completion of the new General Plan a year ago, and stated that as a result, there has been a 50-percent uptick in new projects being reviewed this year. He is a supporter of new development and housing, and also spoke about lobbying on behalf of rural counties at the state level during the COVID-19 pandemic, so there is not a one size fits all solution for restrictions.

Brandon, like Goldemberg, was critical of the TCEDA, and Rodefer’s open support of it. He spoke about the challenges of his family running a local small business. He said the county needs to be aggressive in supporting local businesses, jobs and housing. However, looking back at the past few years, he stated that “big box stores and Wendy’s” is “not the county he grew up in.” He feels that most of the locals feel the county is not on the right track.

On the handling of COVID 19, in District One, Ritts feels the level of concern should be lower in rural counties than more populated areas of the state. He was involved as a Sonora Elementary School board member in putting together a plan for its reopening. He says the county should do everything it can to reopen as quickly and safely as possible, while monitoring the latest numbers.

Goldemberg says he feels Tuolumne County has been fortunate to this point, because neighboring Calaveras, and much of the Central Valley, has seen many more coronavirus cases. He criticized the county for not having a definitive plan early on, and argued that this led to some businesses being “not good cooperators.” He said social distancing, and continuing to wear masks, is important, and the county should not let its guard down.

In District Five, Brandon argued that the county supervisors “missed an opportunity” to lead early on during the pandemic and said it led to people and businesses getting into arguments, especially on social media. He said county leaders should be following the science, and criticized Rodefer for sending a pointed letter to Governor Newsom opposing the mask mandate, and for Rodefer and some board members not wearing masks during meetings.

Rodefer argued that the state must differentiate regulations between rural and urban areas. He is hearing that COVID regulations have led to increased cases of depression and suicide attempts. He says he most worries about the children and how it is impacting their lives. He said resources should be focused on the highest risk categories like congregate care facilities and the elderly.

The debate was mostly cordial over the one and a half hours that it lasted. Goldemberg, Brandon and Rodefer, who have been in he race the longest, all criticized how negative things have become on social media. It was referred to as “vitriolic.”

The event was moderated by Brenda Chapman, retired Superintendent of the Jamestown School District. Election Day is coming up on November 3rd.