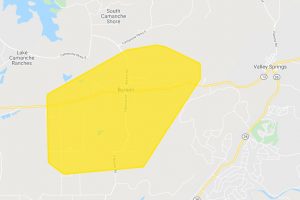 Update at 6:30 p.m: The CHP reports that Highway 12 has reopened to traffic after more than two hours of clean up. PG&E reports that power has been restored to all 442 customers in the Burson area.

Original post at 3:55 p.m: Burson, CA — Traffic is being rerouted on a section of Highway 12 in the Burson area after an excavator brought down power poles. The incident happened around 2:30 p.m. just west of Burson Road.

San Andreas Unit spokesperson Toby Butzler details, “The excavator somehow managed to pull down either four to six telephone/power lines in the area. Those lines and poles unfortunately fell onto Highway 12. Somewhere in the mess, a pickup truck became entangled in the lines. There are no injuries to anyone in the truck.”

Currently, Highway 12 is closed between Burson and Messing roads and will remain so for a “couple of hours”  as PG&E and AT&T crews are on the scene working to repair the damaged poles and lines, according to Butzler. He adds that the recommended detours are Southworth Road to Burson Road or South Camanche Parkway to Burson Road.

PG&E is reporting that 442 customers stretching along Burson Road and Highway 12 are without electricity. The utility gives an estimated repair time of 6:30 p.m.