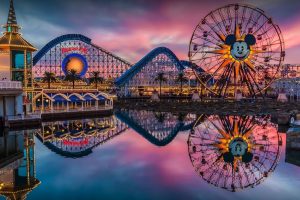 Sacramento, CA – The reopening of California theme parks has been put on hold.

Gov. Gavin Newsom delayed new COVID-19 operating rules for theme parks, like Disneyland, that have been closed since the beginning of the pandemic. That came after tourism industry officials warned the state was set to lose more than $78 billion in travel-related spending this year. The Newsom administration had planned to release the new rules on Friday, according to the governor’s office. The change came after strong industry criticism of the proposed rules prompted state health officials to announce negotiation would continue.

California Secretary of Health and Human Services Agency Dr. Mark Ghaly advised, “Given the size and operational complexities of these unique sectors, we are seeking additional input from health, workforce and business stakeholders to finalize this important framework.”

Theme parks would have been allowed to reopen at 25 percent capacity under the proposed guidelines once the counties they reside in reached the lowest level for virus transmission in the state’s four-tier reopening system. Another, particularly concerning restriction for industry officials, was the stipulation that limited visitors to those living within 120 miles of a theme park. After seeing a draft of the new rules on Thursday, amusement park leaders urged state officials to change them, according to officials of the California Attractions and Parks Association.

Florida, the home of Disney World, has allowed its theme parks to reopen with restrictions. Many Orange County officials, where Disney Land is located, have urged Newsom to issue guidance allowing parks to reopen, noting these businesses have been reopened elsewhere in the country with health and safety measures. Disney reports there have been no major outbreaks in Florida associated with the company’s theme parks but would not divulge whether any cases have occurred there. California’s current coronavirus rules do not allow large gatherings for concerts, conventions and amusement parks.  Disney’s parks in California have been closed since March 14.

Just this week, Disney officials announced 28,000 workers would be laid off at its parks in Florida and California. In a letter to employees, the company blamed its troubles in part on California’s “unwillingness to lift restrictions.” California tourism officials on Friday reported they expect the state to lose $78.8 billion in travel spending for 2020 up from an initial industry loss forecast in June of $75.4 billion for the year. Additionally, Visit California, the state’s tourism marketing authority, does not expect travel spending in the state to return to 2019 levels until at least 2024.

Earlier this week, 19 Democratic and Republican state lawmakers sent a letter to Newsom requesting that theme parks reopen, arguing that theme parks are “controlled venues operating predominantly outdoors” and should be allowed to follow protocols that apply to other indoor businesses that have reopened.

Public health officials have worked closely with Disney to prepare for the reopening of its parks, recommending that the state instead allow parks to reopen at a limited capacity once the county moves to the orange or “Moderate” risk Tier 2 in the state’s color-coded system, which is the second-lowest for virus transmission.