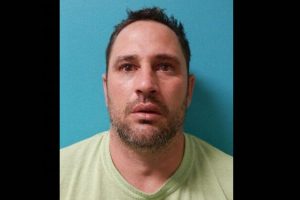 Jamestown, CA – When a fugitive was spotted at a local casino, the wanted man took off running, but he did not get far thanks to the quick actions of a Tuolumne Sheriff’s Deputy’s partner.

The chase and capture of the wanted man, 38-year-old Casey Worley of Oakdale, took place at was Chicken Ranch Casino in Jamestown on Thursday morning. Worley was wanted on felony and misdemeanor charges.

A tip was called into dispatch after Worley was recognized as a wanted fugitive while gambling at the casino. He ran out of the establishment when deputies arrived, disregarding all commands and attempts to stop, according to Sheriff’s officials. That is when the deputy’s partner, K9 Thor, gave pursuit.

Worley was easily chased down and apprehended by the canine. After receiving medical attention, Worley was handcuffed for resisting arrest and possession of methamphetamine. His previous misdemeanor and felony warrants were related to theft, drug and burglary charges. Worley’s bail was set at $50,000.