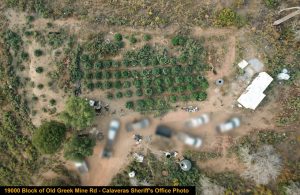 The only one where a suspect was located occurred early last week in the 100 block of Sawver Road in Glencoe. Officials seized 159 growing marijuana plants with a street value of over $111,000. 23-year-old Omar Serrano of West Point was cited for marijuana cultivation, marijuana for sale, and conspiracy to commit a crime.

The other busts/cases are still actively under investigation.

In the 10400 block of Sheep Ranch Road, deputies seized 155 growing marijuana plants. Additionally, one firearm was seized as evidence.

Evidence was collected at all of the sites.