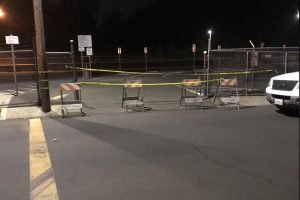 Scene of shooting in a parking lot at Sonora High School

Sonora, CA – The name of the teenager killed in a shooting in a parking lot at Sonora High School has been officially released by investigators.

He is 17-year-old Eric Aguiar of Jamestown a Sonora High school student, who was gunned down last Wednesday just before midnight. When Sonora Police Officers arrived on the scene on School Street, they were unable to locate anyone. That is because Aguiar was already being treated at a local hospital, but sadly succumbed to his injuries, turning the shooting into a homicide case.

On Monday evening, Sonora Police Chief Turu VanderWiel released a statement detailing that the case had “quickly grown outside of our current capabilities to properly manage with regard to staffing and resources” and turned it over to the Tuolumne County Sheriff’s Office. After inquiries from Clarke Broadcasting regarding the status of the investigation, Sheriff’s spokesperson Nicco Sandelin disclosed this information regarding any arrests, stating, “No arrests have been made in relation to this case.”

A day after the shooting, as reported here, Chief VanderWiel told us that “a suspect has been identified along with other “persons of interest,” but no names are being released at this time.” He also warned that the suspects should be considered “armed and dangerous.” Today, Sandelin would only say that “We have all available resources pursuing all leads.” He went on to detail the scene of the murder relaying that shots rang out just before midnight last Wednesday (Sept. 16) and dispatch received multiple reports of gunfire near the school. He adds that within fifteen minutes they got an additional report of a gunshot victim being treated at the local hospital.

In a written statement released by the sheriff’s office it states, “At this time, no further information will be released to ensure the integrity of the investigation. Rest assured, our office will spare no resource to solve this case.”

Sandelin added, “We are 48 hours in from taking this investigation. Of course, there is a lot of work to be done to make sure that everything is buttoned up before we do release anything that could be harmful to the investigation.”

The sheriff’s office is also turning to the public for help and asking that anyone who may have information related to this case should call the Investigations Division of the Sheriff’s Office at (209)694-2900.