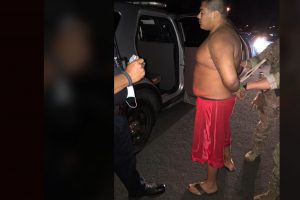 Sonora, CA – The alleged shooter in the murder of 17-year-old Eric Aguiar in a parking lot at Sonora High School has been caught in Utah.

Tuolumne County Sheriff’s officials relay that 20-year-old Joshua Rodriguez of Tuolumne was arrested in Centerville, Utah. Sheriff’s detectives had discovered Rodriguez had fled there and contacted Centerville police to help capture him.

Centerville Police relay that Rodriguez was found “hiding out with a woman in a camper trailer located in the backyard of a residence in Centerville and was taken into custody shortly after midnight this morning.”

Police recount that due to the dangerous nature of this situation, the Bountiful Metropolitan SWAT team was called in to make the arrest. The SWAT team reports it “utilized a flashbang, also known as a flash grenade or less-lethal explosive device, no one was injured, and no damage occurred to private property during this operation.”

At the scene, officers found a knife, a cell phone, and some marijuana. Centerville Police add that the female was detained and questioned, but subsequently released without charges. Currently, Rodriguez is being held at the Davis County Jail awaiting extradition back to Tuolumne County.

The deadly shooting of Aguiar took place on Wednesday, September 16th. At the time, Sonora Police Chief Turu VanderWiel told Clarke Broadcasting that there were several possible suspects on the run and that they should be considered armed and dangerous, as reported here. A day later the SPD turned the case over to the sheriff’s department due to limited resources, as detailed here.