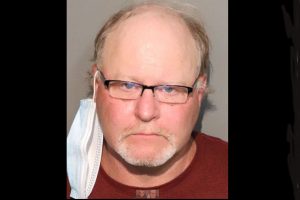 San Andreas, CA – Two men have been arrested for felony elder abuse with a third suspect on the run in Calaveras County.

Sheriff’s officials say the reports came in one after the other in just two days. The first suspect 53-year-old Donald David Nicholson of Burson was taken into custody on Monday, September 7th. Nicholson is accused of both physical and mental abuse after slapping a victim several times in the chest.

Two more elder abuse incidents came in the next day, Tuesday, Sept. 8th. Arrested was 43-year-old Shawn Christopher Anderson from San Andreas who investigators say also subjected the victim to mental and physical abuse. The latter involved repeatedly pushed the victim down to the ground.

Nicholson and Anderson both remain in the Calaveras County jail on $50,000.00 bail each.

That same day, another investigation was launched in Valley Springs, but that suspect is now being sought. Sheriff’s spokesperson Sgt. Greg Stark shares, “It is believed the suspect left the county once he learned law enforcement was investigating the abuse.” This case also includes mental abuse and another charge of financial abuse. Sgt. Stark says since it is an ongoing investigation no further details, including the suspect’s identity or his description, are being released.

The sheriff’s office urges anyone to immediately call 9-1-1 if the abuse is a life-threatening danger. Otherwise, report suspected elder abuse by calling the department at 209-754-6500 or the anonymous tip line at 209-754-6030. Sheriff’s officials provide these definitions and signs of elder abuse below:

Elder abuse is an intentional act or failure to act, by a caregiver or another person in a relationship involving an expectation of trust that causes or creates a risk of harm to an older adult. Elder abuse can consist of emotional, physical, or financial abuse. Often times, the victim is related or knows the suspect, and many times the crimes go unreported due to fear of retaliation, perceived shame in regards to the abuse, and fear of loss of independence.

Physical abuse involves a form of force to cause unnecessary injury or pain on a person. This can be anything from severe beatings to rope or chain restraining, for example. Other forms of physical abuse include but are not limited to pushing, pinching, shoving, burning, biting, drowning, and kicking. Physical abuse can be unintentional — someone may intend to help the elder, but the behavior can still be considered abusive if the action(s) taken embody any of the above. Last but not least, the inappropriate use of medications and physical restraints can also be regarded as physical abuse.

In addition to physical abuse, elder abuse can take a verbal form, which can be mentally disturbing to the victimized individual. Some forms of verbal abuse include name-calling or giving the silent treatment to either intimidate or cause distress for someone. It can also take the form of cursing, yelling, or making insulting remarks. When a caregiver, family member, or even a stranger behaves in any of the above ways to cause mental anguish to an elder, it can be considered abusive. If an elderly person feels that they are being isolated or treated like a child through threats or manipulative behavior, they can also feel emotionally abused.

If an elderly person does not take full responsibility and aware of their financial situation, they are more susceptible to exploitation. This can range from the inappropriate use of the older person’s funds to the act of denying the individual from accessing his or her funds or home. Fraud, forgery, forced property transfers, or the act of purchasing expensive items with the elder’s money without his or her knowledge are also examples of financial abuse. Financial abuse can also take place on the telephone or face-to-face in the form of solicitation. For example, salespeople or so-called friends can perpetrate scams for home repair services, health-related services, and other things that an elderly may need and be inclined to buy into.