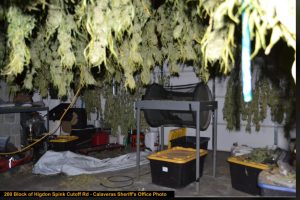 The first raid happened on August 24th in the 10000 block of Swiss Ranch Road in Mountain Ranch. There the Calaveras County Sheriff’s Office Marijuana Enforcement Unit seized 1,299 growing marijuana plants with an estimated value exceeding $909,000. Three days later, on the 26th, the unit headed to a residence in the 7000 block of Old Gulch Road in San Andreas. At that location, deputies discovered that a garage had been converted into a grow, but most of the operation was outdoors with 201 growing marijuana plants estimated at more than $140,000 confiscated along with 7 pounds of processed marijuana. No suspects were found at either site and the investigations are ongoing.

One day later, the unit hit two properties. One in the 200 block of Higdon Spink Cutoff Road in West Point hauled in 116 growing pot plants estimated at over $81,000, 3.6 grams of heroin, 10 ounces of concentrated marijuana, 143 pounds of processed marijuana, and 3 firearms. One suspect, 23-year-old Ray Stewart Wineman IV of West Point was arrested at the site for possession of a controlled substance, sales, and illegal marijuana cultivation.

Next deputies headed over to a residence in 1000 block of Tone Trail in Railroad Flat. Deputies eradicated 83 growing pot plants with an estimated value exceeding $58,000. One male suspect was contacted at the site, but sheriff’s officials relay, “His degree of involvement in the growing operation is under investigation. Charges will be forwarded to the District Attorney.”

Anyone spotting or having knowledge of illegal marijuana grows in the county is asked to call the sheriff’s Anonymous Marijuana Tip Line at (209) 754-6870.