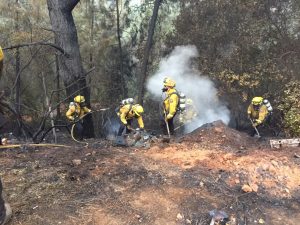 Sonora, CA — A fire in the 18900 block of Golden Dove Road briefly threatened two vehicles and a structure early this morning.

The fire was reported just after 2:30am by someone who spotted heavy smoke in the area of Highway 108 and Golf Links Road. The fire on Golden Dove Road was contained between a quarter to a half-acre by arriving officials from Tuolumne County Fire and CAL Fire.

Thankfully the vehicles and structure nearby were not damaged. CAL Fire spokesperson Emily Kilgore says the cause of the blaze remains under investigation. Mop-up continued until around 9:15am.