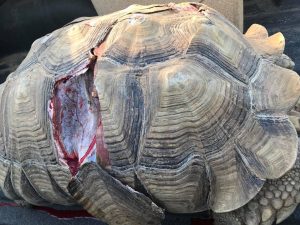 Sonora, CA – Highway 49 proves dangerous for wildlife this past week in the San Andreas area of Calaveras County as two animals were found injured, but unfortunately only one survived.

CAL Fire Tuolumne-Calaveras Unit Captain Stephanie Hagstrom was horrified to witness a beautiful Coopers Hawk collide with a moving vehicle about a mile south of San Andreas along the highway on Tuesday. Hagstrom was able to rescue the bird and then notified Tri-County Wildlife Care based out of Sutter Creek to help the injured hawk. Unfortunately, officials there tell Clarke Broadcasting that the raptor suffered joint fractures, the equivalent to a human knee injury that would have left it unable to ever stand again. Sadly, it had to be euthanized.

A day later (Wednesday), produced a happier ending for a tortoise. It was lucky to be spotted at the intersection of Highway 49 and Mountain Ranch Road by CAL Fire Tuolumne-Calaveras Unit Division Chief Adam Frese. Pictures in the image box show its shell was cracked with two gaping wounds after presumably being hit by a vehicle. Frese was able to scoop up the injured turtle, which was transferred to an animal rescue for care. The reptile underwent surgery and is expected to recover!