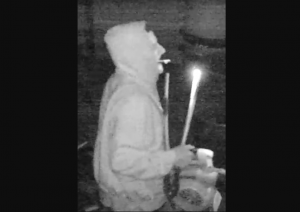 San Andreas, CA – Hoping for public help in making a burglary arrest, sheriff’s officials have released surveillance footage from near the crime scene.

There, they learned that sometime the previous night a suspect cut the lock of a container and stole several items, including a white and orange STIHL chainsaw. While canvassing the area for usable evidence, deputies were able to locate security camera footage that contained an image of a possible suspect. To view stills from it, click into the image box slideshow.