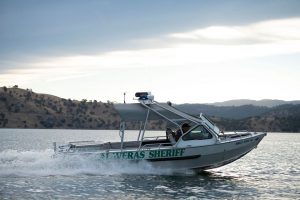 “There is an increase in the amount of activity in our local lakes, which is causing us to issue a public safety announcement regarding safe boating on our local waterways,” states Calaveras County Sheriff’s spokesperson Sgt. Greg Stark.

Asked for his perspective, he shares, “There’s definitely more people recreating. The uptick in citations along with the disabled vessels is an increase from years past.”

Continuing, Stark surmises, “If I had to say, [it is] mostly nonlocals but it is hard to say, top of the head — the majority of the citations are no wakes, no boater card and not wearing lifejackets – more of the safety violations as opposed to registration and non-moving violations.”

He adds, “The boating laws are universal to all waterways in California…we hope that when people come to Calaveras County to recreate they respect not only themselves and other people in the water and operate their vessels within a responsible manner.”

Speculating that there could be some cooped-up energy from visitors and locals who are tired of COVID-19 related isolation protocols being let out in a nonproductive manner, Stark encourages recreaters to enjoy the waterways but in a safe manner.

Failing to adhere to all the buoy markers on the lakes are among his list of peeves. “Many of the lakes have different no-wake zones…they don’t pay attention to the changing conditions of the lake, other boater traffic, inattention to operating the vessel…is a huge concern,” he states.

Too, “By the time you need a lifejacket, it’s too late. Just like a seatbelt, you can’t put it on during an accident.”

Besides breaking the law, failing to follow safe boating operation can lead to major property damage or serious injury, Stark points out. He reports, “So far this year the Marine Safety Division has handled 16 boating accidents — all due to inattention on one or both parties — three drownings during which none of the drowning victims had lifejackets on, assisted over 76 disabled vessels, and issued 112 citations.”

He provides a recent snapshot of calls for service that required a response from a Marine Safety Deputy the week of July 20-26. Among the five incidents was a boater assist on New Melones for engine trouble with a tow back to the marina; a jet-ski accident on Melones resulting in injuries due to an operator’s excessive speeds; an investigation into an overdue fisherman on Lake Hogan during which the 83-year-old person was located deceased in the water with no foul play suspected; a major injury two-vessel collision with injuries at Lake Camanche; and another boating accident at Lake Hogan during which the vessel completely sunk when the operator failed to secure the hull plug prior to launching.

As a result, the division has provided the following safe boating reminders:

— Each vessel must have one wearable U.S. Coast Guard-approved life jacket readily available for each passenger

— It is a violation of the law for anyone under the age of 16 to operate a personal watercraft. In addition, EVERY operator and passenger are required to wear a Coast Guard-approved lifejacket while underway

— This year, everyone operating a vessel in any waterway in California must have a California Boater Card in their possession if 35 years old or under. Next year it will be 40 and under

— Make sure your vessel is in good working order, including the engine and battery

— Just because you are on the water doesn’t mean you can’t have an onboard fire. You need to have a fire extinguisher on board and all passengers should know its location and how to use it

— Always swim within your own ability. If you are not a strong swimmer, stay out of the deep or fast-moving water

— Each body of water has its own hazards. Use a life vest when swimming in water with low visibility. Several bodies of water have varying topography, some with sharp drop-offs. Enter the water feet first. Never dive headfirst into the water if you do not know how deep it is