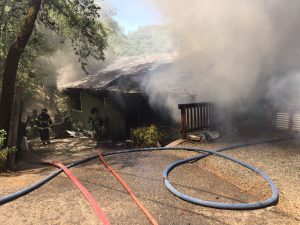 Update at 4:30pm: Officials were able to quickly stop the spread of a fire that burned a house and nearby vegetation 12:30pm in the 500 block of Sonora Avenue (behind the Mother Lode Fairgrounds off Stockton Road).

Sonora Fire Chief Aimee New states, “The occupants were not at the home at the time when the fire started, but unfortunately we did have a dog that perished in the fire. The house has extreme damage to it. and it did extend into the wildland. Crews were able to stop the forward progress of the wildland fire quickly and contain the fire to the original structure.”

Chief New adds that an investigation into the cause is still ongoing. Officials have been narrowing in on potential ignition points. At this point, Chief New indicates that It is believed that it could have been either an electrical fire or started by smoking material (a cigarette).

The Sonora Fire Department was the first unit on scene, and there was assistance from Columbia Fire, Jamestown Fire, CAL Fire and Tuolumne County Fire.

Update at 1 p.m.: CAL Fire reports that crews are getting some knockdown in the structure fire burning behind the Mother Lode Fairgrounds in the 430 block of Sonora Avenue. A two-story home was 50% involved with a deck on fire when firefighter arrived on the scene. It is unclear whether anyone was inside the home when the flames broke out.

CAL Fire reports that the flames spread to some grass, which was contained in minutes as just a spot fire. All aircraft have been released from the scene. Crews will remain on scene working towards full containment and then mopping up for the next couple of hours. What ignited the blaze is under investigation.

A special thanks to our community partners Taylor and Randall Rowe, and Karen Jensen.

Original post at 12:15 p.m.: Sonora, CA — Columbia aircraft and ground crews are heading back out for a second fire in about an hour.

A plume of smoke can be seen in the skies near the Mother Lode Fairgrounds as the fire is in a structure behind it in the 430 block of Sonora Avenue. There are no further details on the blaze at this time and an update will be provided as soon as new information comes into the newsroom.