Unsolicited Seed Packets In Your Mailbox? Read This Story 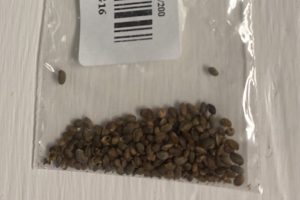 Seeds In the mail

San Andreas, CA – If you received seed packets in the mail, local environmental health officials want you to turn them in as they could be part of a suspicious scheme going on throughout the nation.

Wednesday, the Calaveras County Environmental Agency Interim Administrator Lisa Medina reported that residents are just beginning to receive unsolicited seed packets from China and other parts of Asia. Examples of seeds may vary.

“The Environmental Management Agency started receiving phone calls this afternoon,” she shares. “The California Department of Food and Agriculture recently became aware of the reports that seed packets are being shipped to homeowners throughout the United States which now include Calaveras residents.”

The Department of Food and Agriculture is instructing residents not to open, plant, or dispose of any unsolicited seed packets received. Calaveras residents are specifically instructed to take all seed packets in a sealed bag or container to the Environmental Management Agency – Department of Agriculture/Weights and Measures, located at 23 E. Saint Charles San Andreas.

Again, Medina emphasizes, “The most important thing noted is that residents are directed not to open, plant, or dispose of any unsolicited seed packets received and to take them directly in a sealed bag or container to our Agriculture Department.”

Clarke Broadcasting notes that one of our staff members, a Tuolumne County resident, has also received unsolicited seed packets. You can view a photo in the image box. The Tuolumne County Environmental Health Office can be reached at 209 533-5633.