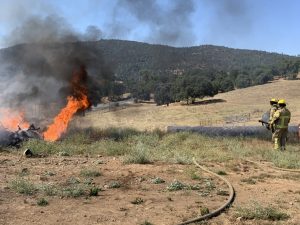 Update at 12:05pm: Three people were inside the helicopter that crashed at around 10am today off Highway 12 near San Andreas.

PG&E spokesperson Brandi Merlo adds, “The pilot and two PG&E electric troublemen were able to exit the helicopter before it caught on fire. The fire was quickly extinguished and the three were transported to a local hospital. PG&E is working closely with first responders to ensure the safety of the area.”

The NTSB and FAA have been called in to investigate the crash.

Update at 10:45am: Calaveras County Sheriff’s Office spokesperson, Sgt. Greg Stark, confirms that a helicopter crashed this morning in an area off Highway 12 between San Andreas and Valley Springs. It is a helicopter that is contracted with PG&E. He adds that there are “minor injuries” reported. It ignited a small fire that was quickly controlled by arriving officials. We’ll pass along more information when it becomes available. It happened at around 10am.

Original story posted at 10:20am: San Andreas, CA — Numerous emergency responders are heading to a report of a helicopter crash in a field located off Highway 12 between San Andreas and Valley Springs.

The CHP indicates that the helicopter crashed near a ranch property and it started a small fire. The Calaveras County Sheriff’s Office and firefighters are also responding. No additional information is immediately available. Be prepared for activity in the area.