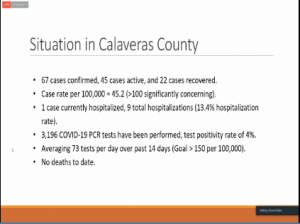 San Andreas, CA — During today’s discussion about COVID-19, the Calaveras Board Of Supervisors requested that staff quickly develop an ordinance that would allow businesses flexibility to remain open while still meeting state guidelines.

It was brought up by Supervisor Jack Garamendi, and strongly endorsed by fellow board members. It could include allowing businesses, such as restaurants, over the short-term, to use parking lots and sidewalks to setup outdoor seating.  We reported yesterday that Governor Gavin Newsom ordered the closure of indoor restaurants, wineries, museums and movie theaters.

Supervisor Benjamin Stopper added that the idea is to find a way to best maintain livelihoods while dealing with the current health pandemic. County staff will get work on a proposed ordinance, and bring it back to the board during a special meeting, which will be scheduled in the near future.

Supervisor Dennis Mills expressed a desire to also look at ways to limit capacity at popular recreation sites, like Natural Bridges, which as seen a spike in tourists from outside the county.

During the meeting, Public Health Officer, Dr. Dean Kelaita, gave an update to the board on the latest directives issued by the state. Speaking about triggers that could put the county on the state’s watchlist, with further restrictions, the case rate over a 14 day period needs to stay below 100 per 100,000 residents. Calaveras County is currently at 45.2 per 100,000, which is considered “moderately concerning.” Also of note, the number of tests per 100,000 residents over the past seven days should be at least 150, and Calaveras County is only at around 146.

Board Chair Merita Callaway posed a question about the possibility of patients being transferred to Calaveras from the central valley, due to spikes in places like San Joaquin County, and if it could impact the local medical capacity. She stated she has heard rumors about patients being taken from Lodi to Sonora.

Dr. Kelaita noted that it is common for hospitals to transfer patients to other locations. “That happens routinely,” he stated.

Regarding the neighboring counties, he stated, “There were I think one or two patients that were transferred from Lodi Memorial Hospital to Adventist Health Hospital in Sonora, with COVID-19 infection, and that was to help alleviate the burden on that hospital (Lodi). Dr. Kelaita said that this type of thing has not happened at Mark Twain Medical Center, to his knowledge, and indicated the likelihood is low that it would happen, given that it is a smaller hospital.

It was also stated that Calaveras County’s last case number report was released on Friday, totaling 67, but newer, increased numbers, will be released later today.