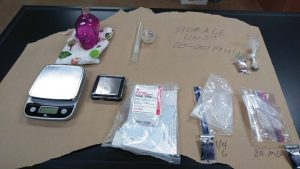 San Andreas, CA – A woman is back in jail with no bail following a probation search of her residence, vehicle, and storage unit.

Calaveras County Sheriff’s spokesperson Sgt. Greg Stark reports that probation officers recently requested assistance from the sheriff’s investigations division regarding illegal narcotics and other suspicious items located while conducting a routine probation search at a residence in the 3000-block of Juniper Drive in Vallecito.

The subject of the search was 47-year-old Brandy Felts-Patelzick at whose home deputies located methamphetamine, paraphernalia, cash, and evidence of illegal sales of controlled substances.

While she was not at the residence, deputies located the suspect in her vehicle in Valley Springs shortly thereafter and turned up more methamphetamine, paraphernalia, cash, and heroin inside it. During the investigation, Felts-Patelzick’s storage unit was also searched where more evidence of drug use and sales was discovered.

Stark says that overall search findings included 23.3 grams of methamphetamine in various packages, a small amount of heroin, $4,625 in cash, nine hypodermic needles, and other paraphernalia, all of which was seized as evidence.

She was booked into the Calaveras County Jail on felony charges of probation violation and possession of a controlled substance for sale along with a bench warrant out of Tuolumne County for violation of probation on narcotics charges.

Stark notes that Felts-Patelzick had been arrested prior to this incident in Calaveras County for violating her probation and possessing controlled substances and was released as part of the state-mandated “zero bail” prisoner release due to the COVID-19 pandemic. He adds that her no-bail hold is due to her violation of probation charge.