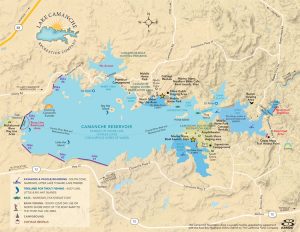 Update at 4:25 p.m.: Sheriff’s officials are reporting another sad twist to the second drowning in two weeks at Lake Camanche.

Calaveras County Sheriff’s spokesperson Sgt. Greg Stark shares with Clarke Broadcasting that his office learned through witnesses and an interpreter involved in the investigation that the 17-year-old male who drowned Sunday afternoon entered the water to assist a 12-year-old male who had gotten in near the Eucalyptus Day use area and within minutes began having trouble due to the uneven lake bottom and not knowing how to swim.

The 17-year-old entered the water to assist his younger friend. Witness accounts indicate that he was able to grab the youth and hand him to another nearby swimmer but was unable to get himself to safety. As posted below, the victim became tired and indicated he had a lower leg cramp before he disappeared under the water. While friends called 911, the victim was later found about 30 feet from shore in 14 feet of water.

Sheriff’s spokesperson Sgt. Greg Stark says Sunday in the noon hour dispatch was notified of the incident, which involved a 17-year-old male who had been swimming at Lake Camanche in Burson with two friends near the low water boat ramp.

Stark recounts that the victim reportedly became tired and complained of a cramp in his lower leg before going underwater. The two friends swam back to shore to call 911 and a Calaveras County Marine Safety deputy and Amador Marine Safety unit that were both nearby immediately began searching the area.

The Calaveras County Sheriff’s Dive Team was called in to assist and subsequently found the victim about 30 feet from shore in 14 feet of water. Stark adds that the victim was a visitor to the area on vacation from Mexico.

In light of the incident being the second drowning fatality in as many weeks, Stark says the Sheriff’s Office is reminding folks to always swim within their ability and stay out of deep or fast-moving water if you are not a strong swimmer. If you become tired while trying to swim back to shore, try to calm yourself from fear to conserve energy and float on your back.

Remember every water attraction has its own hazards. Several have topography with sharp drop offs. Enter the water feet first and never dive head-first into the water if you do not know the depth in that area. Use a life vest when swimming in water with low visibility. Carefully watch out for children and those who do not swim well. Learn CPR.

He adds, where pools and spas are concerned, for safety’s sake make sure they fenced on all sides, and have a lock on the entrance gate.