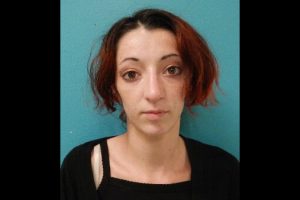 Sonora, CA — While on patrol around 7 a.m. on Thursday, a Tuolumne County Sheriff’s Deputy spied a vehicle parked behind the Jamba Juice at the Crossroads Shopping Center on Sanguinetti Road. What caught his eye was no license plates on the automobile.

Inside the vehicle was, 24-year-old Zalena Rosa Herrera of Modesto and 29-year-old David Martin Metcalfe. A records check revealed he had an out of county felony warrant related to a vehicle theft, allowing for his arrest.

The deputy then turned his attention to the vehicle. A check of the VIN number revealed it had been stolen out of Stockton. A search of the vehicle uncovered some drug paraphernalia.

Surprisingly, upon further questioning, it was Herrera who admitted to having the stolen vehicle and the paraphernalia. However, she did not confess to stealing the vehicle. Her bail was set at $10,000 for the vehicle, but she also had an out of county hold for a felony drug charge and probation violation for $100,500.

Metcalfe was arrested solely on the outstanding warrant with a $25,000 bail.