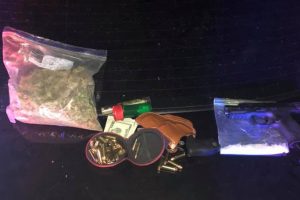 Drugs seized from the suspect's walker

Jamestown, CA – Imagine the surprise of a Tuolumne County Sheriff’s Deputy when he found a man’s walker being used for more than just his health needs – hidden on it was drugs and a stolen deadly weapon.

The deputy pulled over a Mercedes sedan near the Chicken Ranch Casino in Jamestown on Thursday night for a suspended registration. It was also learned that the driver, 58-year-old George Schmidt of Modesto, had a suspended driver’s license as well. That led to a search of his vehicle that turned up a revolver in a holster and ammunition under the driver seat.

As the deputy continued to search the car, Schmidt asked if he could have his walker. The deputy obligated, but before handing it over decided to check its compartments. A good move, as inside was a stolen, loaded 9mm handgun with a high capacity magazine, over 11 grams of methamphetamine, more than 200 grams of marijuana and 24 Oxycodone pills.

Schmidt was taken into custody for possession of a stolen firearm, drugs for sale, and having a controlled substance while armed, allowing the deputy to walk him right into the Tuolumne County Jail. His bail is set at $25,000.