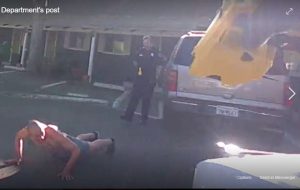 Sonora, CA – Image box photos show the tense situation outside a Sonora motel as police officers – one with a taser drawn – had to talk a knife-wielding suspect to drop the weapon.

Officers were called to the 400 block of West Stockton Street Wednesday evening for a report of a man with a knife. Once on scene, witnesses recounted that 34-year-old Levi Coon of Sonora allegedly began waving a knife and threatening another man during an argument.

Officers located Coon nearby in the Gold Lodge parking lot. When they approached, Coon grabbed a knife out of his pocket. The officers ordered him to put it down, but he refused. With one of the officers having a taser target on Coon, a negotiation began and Coon dropped the knife several minutes later.

Coon was arrested without further incident for felony criminal threats, felony assault with a deadly weapon, and brandishing a weapon. Coon remains in custody and is being held on $40,000 bail.

Just last month, Coon was arrested for arson after igniting a fire at a Sonora gas station near the pumps, as reported here.