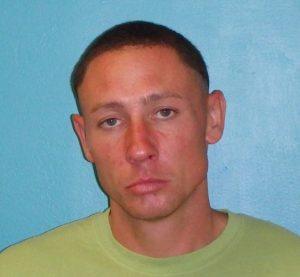 Sonora, CA — A man allegedly got upset and purposefully started a fire near a gas pump in downtown Sonora.

The Sonora Police Department reports that 34-year-old Levi Coon was allegedly yelling at people near the 76 Station on South Washington Street at 8pm yesterday and he pulled out a piece of vegetation from a planter box and lit it on fire.

The SPD adds, “Witnesses also said that Coon added a cigarette box to the flame and lit that on fire as well. An aware employee of the 76 Station bravely ran over and stomped out the flames.

Coon was arrested by arriving officers and booked into Tuolumne County Jail. The PD thanks an anonymous caller, and the employee, whose quick actions helped avoid a very bad potential situation.