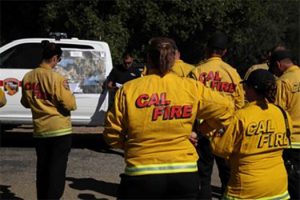 Update 7:20 p.m.: CAL Fire spokesperson Emily Kilgore makes a correction to an earlier statement she made to Clarke Broadcasting regarding where the fire ignited on the Performing Animal Welfare Society or PAWS sanctuary located at 1065 Pool Station Road near Russells Road in the San Andreas area of Calaveras County. Originally, she relayed that the vegetation fire was within the boundary of PAWS Vegetation Management Project (VMP) prescribed burn going on at the property, detailed here. However, she updates that further evaluation of the area and containment lines show the two-acre fire was actually outside the boundary of the prescribed burn originally planned. Further details on the blaze can be viewed below.

Update at 3:15 p.m.:  The forward rate of spread has been stopped on a vegetation fire at the Performing Animal Welfare Society or PAWS property located at 1065 Pool Station Road near Russells Road in the San Andreas area of Calaveras County. As reported yesterday, a prescribed burn in conjunction with CAL Fire was ignited today for the PAWS Vegetation Management Project (VMP). CAL Fire spokesperson Emily Kilgore details what happened, “There are two acres of vegetation that has been ignited outside of the original control line. However, it’s still within the boundaries of the vegetation management plan for the PAWS VMP.”

All incoming resources have been called off. Ground crews will remain on scene working towards full containment and mopping up. None of the animals or structures on the property were threatened.

Regarding the spread of the fire, Kilgore relays there could be several factors including the terrain, wind and dense pockets of vegetation that could have contributed to the fire. She adds that the prescribed burn has been canceled for today. The burn was also scheduled for Friday, but Kilgore did not know if it has been canceled as well. Ground crews will remain on scene working towards full containment and mopping up.

Original post at 2:40 p.m.: San Andreas, CA — Columbia Aircraft and ground crews are headed to the  Performing Animal Welfare Society or PAWS property located at 1065 Pool Station Road near Russells Road for a report of a vegetation fire.

PAWS is a sanctuary for abused, injured, and abandoned captive wildlife.  However, as we reported here yesterday, a prescribed burn in conjunction with CAL Fire was slated to be ignited today at the site to reduce fuels and protect both the sanctuary and community of San Andreas from wildfires. Spokesperson Emily Kilgore tells Clarke Broadcasting that she was headed to the scene and did not have any further details on the blaze. So it is unclear at this time if this is an escaped fire or some has accidentally reported the prescribed burn as a wildfire. An update will be provided as soon as new information comes into the newsroom.