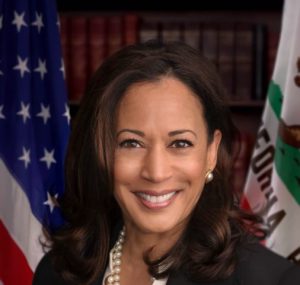 Harris was Thursday’s KVML “Newsmaker of the Day”. Here are her words:

“Thank you to Speaker Pelosi, Leader Schumer, Leader Hoyer, Whip Cliburn, CBC Chair Karen Bass, my brother Cory Booker, Chairman Nadler, and Chairman Jeffries, and everyone for the work that so many of you have been doing for decades, for decades, shouting and passing or writing legislation, and requiring that America take seriously this issue of policing, and take seriously the issue that when the people are marching in the street, it is because they are fully aware of the history of this issue in America. And they’ve had enough. So, I thank all the leaders here for what you do.

And we’re here because Black Americans want to stop being killed. Just last week, we couldn’t even pass an anti-lynching bill in the United States Senate. So, when we look at where we are now with this piece of legislation, we have to understand. Yes, as a country, we’ve seen great progress. But just last week in the year of our Lord 2020, we could not get an anti-lynching bill passed in the United States Senate.

But we are here today with common sense solutions to hold, at least at the federal level, to hold police accountable. But we know this is an issue that is not just at the federal level. It is at the state and local level as well. But we are here today to say in our position as leaders in our federal government, that reform and change must happen and it must happen now.

But to be clear also, there is a broader issue that is not being addressed in this bill. And that is what we must do as a nation to truly achieve safe and healthy communities. Part of what has been upside down in policing policy in America is that we have confused, having safe communities with hiring more cops on the street, as though that is the way to achieve safe communities, when in fact, the real way to achieve safe and healthy communities is to invest in those communities- in affordable housing, in the ability for home ownership, jobs, funding our public schools, giving people access to capital so they can go grow those small businesses that are part of the leadership and the health of these communities.

So, ours is a bill that addresses a very specific matter under a larger umbrella of all that must be addressed. When we talk about the need for safety and safe and healthy communities in America, this specifically is a bill about accountability and consequence for bad behaviors by those who have been invested by society, and the people, with the ability to wear a badge and carry a gun.

So, what we are doing today is saying that we need to have consequences and accountability in America for policing. But we also know that this is not the way that we are going to achieve healthy and safe communities. It has but a part of a much bigger issue that we still must address.

So, in closing, I’ll just mention a few of the other points that are in the bill that are very important. And I say this as a former prosecutor, we need a national use of force standard. Right now, the question asked if there is police misconduct and excessive force is to ask have that use of force – was it reasonable? Well, as we all know, we can reason away just about anything. The appropriate and fair question to ask is – was it necessary? So, part of what our bill will address is a national use of force standard, independent investigations. Again, as a former prosecutor, I can say, no matter how well intentioned the prosecutor of a DA’s office, when they are confronted with dealing with misconduct by a police officer who serves in a department they work with every day, at the very least there will be an appearance of conflict, even when none is intended.

If a justice system is going to be robust and real, it must not only do justice, there must be an appearance of justice and confidence by the public that justice is being done in that place. So independent investigations and then the last piece that I’ll add is the pattern and practice investigations under President Obama, under a General Holder these were robust. Where when there was a finding or an accusation that there was a pattern and practice within a law enforcement agency. The federal government would do investigations. Well, those under this current administration have practically been shut down. They need to be reinstated but also what we are saying is to give it teeth in addition to what has been done in the past, we will grow on that progress by giving the Civil Rights Division of the Department of Justice subpoena power so, when police departments do not comply with requests, they will be required to by responding to a subpoena.

And so my final point is, again, that it is time for this. And I’m so heartened by all of the colleagues we have in the United States Senate like Leader Schumer, who have banded together in support of this and there’s more work to be done, but I applaud all of the leaders on the stage. Thank you.”